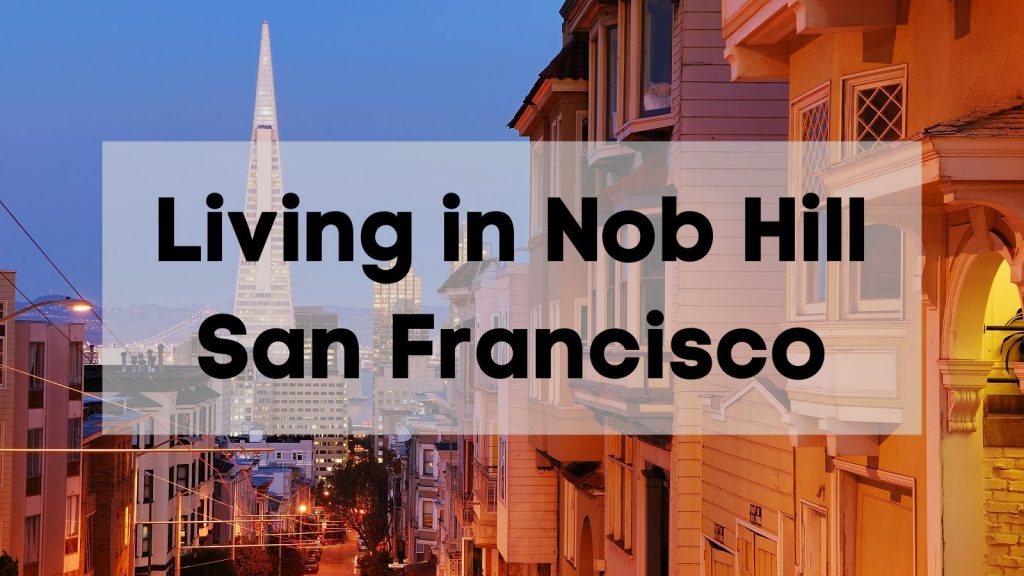 Living in Nob Hill SF Neighborhood | 🍔 Restaurants, Things to Do, Demographics, What it’s Like in Nob Hill

Where Is Nob Hill?

The San Francisco Nob Hill neighborhood is in the Central or downtown district of San Francisco. It’s a hub surrounded by some of San Francisco’s top destinations and bordered by Chinatown and the Financial District, the residential Russian Hill neighborhood with its iconic Lombard Street, Pacific Heights, and Union Square, the city’s commercial hub. To the south is Lower Nob Hill, sometimes referred to as TenderNob or Nobberloin, and beyond it, the gritty Tenderloin neighborhood.

The Nob Hill neighborhood is served by the Powell-Hyde line of the San Francisco cable car operated by SFMTA. You can see all Nob Hill Muni routes here. Union Square adjacent to Nob Hill is the heart of San Francisco and served by all three cable car lines, bus, and light rail service.

Nob Hill SF was originally known as California Hill after California Avenue. It’s one of the original San Fran hills that was developed once the California Street Cable Railroad was constructed in 1878. The Nob Hill name origin comes from the Big 4 SF railroad tycoons known as “nabobs,” a term for wealthy, prominent men which was shortened to “nob.” “The Nobs” built mansions in the Nob Hill area. Leland Stanford, the founder of Stanford University and the owner of the railroad company, was one of the most prominent and wealthy men in San Francisco.

The neighborhood and Nob Hill mansions were destroyed by the 1906 earthquake aside from the granite walls surrounding the Big Four San Francisco mansions still visible today. The mansion owners rebuilt elsewhere, but the Nob Hill area has maintained its affluence and status that has led to the nickname “Snob Hill.”

What should you expect after moving to Nob Hill SF? This diverse, central neighborhood is dominated by the large hill that gives each side of the community a different vibe influenced by the closest neighborhood, whether it’s Chinatown to the east, the gritty Tenderloin to the south, or the affluent Pacific Heights and Russian Hill areas to the north and west.

The SF Nob Hill neighborhood has long been an affluent, upper crust community, but it’s developing a younger and hipper vibe. You’ll love the combination of hip bars and eateries alongside vintage barber shops and cocktail lounges.

San Francisco’s Nob Hill is close to the city center and densely populated which makes it feel very urban despite the nightlife and shopping mostly being confined to the edges of the neighborhood. Of course, you’ll want to be prepared for climbing the hill back home after a night out!

Fortunately, Nob Hill in San Francisco is served well by public transportation. There are many buses running through the Nob Hill area, but you’ll rely a lot on the cable cars for climbing the hill.

Overall, young professionals and singles love living in one of the most iconic San Francisco neighborhoods in the middle of everything.

Things to Do in Nob Hill

Nob Hill SF is one of San Francisco’s oldest neighborhoods and home to not only popular attractions but some of the best views and fun nightlife spots. Here’s what to do in Nob Hill for singles, families, and couples.

Grace Cathedral is the most recognizable Nob Hill landmark. The third largest Episcopal Cathedral in the country, this gorgeous French Gothic cathedral is open to the public. Marvel at the two towers, golden doors, and dozens of stained glass windows or even stop by to attend jazz concerts or yoga.

Across the street is Huntington Park, the neighborhood’s central park and a popular destination for dog owners and parents. This hotspot area is home to the San Francisco Cable Car Museum, a free museum with historical exhibits on the cable car system you will use often while living in Nob Hill.

The nearby SF Masonic Auditorium on top of Nob Hill features live musical performances from top acts in a renovated, tiered space with multiple bars, Zeppelin Chandeliers, and a VIP Room.

There is limited nightlife, shopping, and dining in the center of the neighborhood, but it never feels too residential thanks to its central location. Along Polk Street, you’ll find dozens of upscale restaurants and casual cafes, fun bars, and small shops to explore like the popular Belle Cose for high-end vintage and consignment clothing. The eastern side of the neighborhood has plenty of spillover from Chinatown with authentic ethnic cuisine while the southern edge (TenderNob) features tons of dive bars and interesting, offbeat shops.

You’ll find plenty of spots for a fun night on the town or a romantic date night. Top of the Mark is one of the most iconic destinations for nightlife in Nob Hill. Enjoy 360-degree views of the city from the 19th floor of the Mark Hopkins Intercontinental in this sleek lounge and bar. Stop in for handcrafted cocktails and tapas plus live music a few times a week.

A post shared by TOP OF THE MARK (@topofthemarksf)

The Tonga Room & Hurricane Bar has been one of San Francisco’s coolest bars since 1945. The legendary tiki bar hosts live music and DJs with an artificial indoor thunderstorm! For jazz lovers, try Amelie. This award-winning wine bar on Polk Street features jazz performances every Sunday and Monday.

There are tons of other bars always bustling with locals like Hyde Out where you can play board games in the quiet upstairs lounge area and watch the action below and the laid-back Zeki’s Bar with wood-burning fireplaces and sports on the TVs.

Nob Hill Cafe is a favorite among locals. Stop by for an intimate date and enjoy authentic Tuscan-style Italian cuisine. Swan Oyster Depot is one of the best seafood restaurants in San Francisco! This no-frills and bustling fish market features casual seafood dishes and a raw bar with fish sourced that morning by chef recommendation.

Stop into Le Beau Market for groceries and essentials. This family-run market has been a Nob Hill favorite for over 35 years with high-end produce and regular lunch specials. There’s also a Trader Joe’s in the neighborhood now for more affordable groceries.

Here’s where to find these fun Nob Hill things to do.

While living in Nob Hill, you will be served by the San Francisco Unified School District (SFUSD) which has more than 57,000 enrolled students. There are two SFUSD public schools in Nob Hill: Spring Valley Science Elementary School with a STEAM-based curriculum and Redding Elementary School. The Nob Hill elementary schools feed into Marina Middle School in the Marina District.

After moving to Nob Hill, you’ll love living in one of the safest neighborhoods in San Francisco. In fact, the biggest risk you’ll probably face is the chance of tripping and getting hurt walking up and down the steep hill!

The southern part of the neighborhood into Lower Hob Hill has more crime as this area borders Tenderloin, one of the most dangerous neighborhoods in San Francisco.

You can use this San Francisco crime map to explore crime in Nob Hill and surrounding areas.

The median price of Nob Hill homes for sale is $1.3 million with 35 median days on market. That’s down 25% year-over-year. More than half of homes in Nob Hill sell above list price.

The median price of a Nob Hill condo is $1.295 million, the most common type of housing available. There are very few single-family homes remaining in Nob Hill, but these San Francisco hill houses often sell for more than $10 million.

One of the most desirable Nob Hill condo developments is Gramercy Towers, a 16-floor condo building built in the 1970s right across from Grace Cathedral and close to Huntington Park. The building has an indoor heated pool and sauna with a retractable roof and reserved garage parking!

A post shared by The Pinnacle at Nob Hill (@pinnacleatnobhill)

Planning to rent after moving to Nob Hill? The average rent for Nob Hill SF apartments is $2,700 according to RentCafe. By comparison, average San Francisco rent is $3,400.

The Pinnacle at Nob Hill is one of the best places to live in San Francisco for young professionals with studio and one-bedroom apartments close to Union Square.

Is moving to Nob Hill San Francisco in your future? Give us a call at AMS Relocation for a free, personalized moving estimate from our award-winning Nob Hill movers!