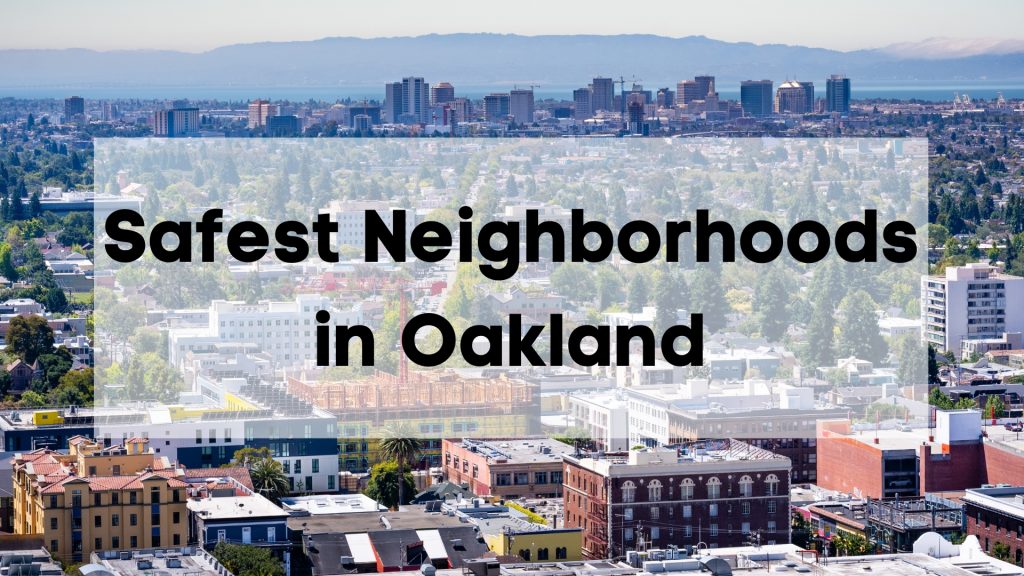 Oakland is making a name for itself! Niche considers Oakland to be the second-most diverse city in the country. It also ranks Oakland as #12 on its list of the best American cities for outdoor activities and as #25 on its list of the best cities for young professionals. However, few people know of these facts. Many people have heard about Oakland crime and are concerned about moving to Oakland.

Before you call a moving company, you should do a few things. Read about crime in Oakland, California, and where the safest neighborhoods in Oakland are. You should also learn about places to avoid. Then you should narrow your living options down to the best neighborhood. Research where the city’s best schools, public parks, and attractions are. Whether you’re living in Oakland with your family or spouse, or on your own, you’ll want to consider the safest Oakland neighborhoods with affordable homes and great amenities.

Unsure of where to start your research? You can start here with our guide on the best neighborhoods in Oakland.

However, an Oakland crime map shows that not all areas have crime. Many crimes occur in the western parts of the city close to Lake Merritt and San Francisco Bay. Eastern neighborhoods have fewer crimes, with some of the safest neighborhoods in Oakland reporting almost no crimes on an average week.

Many crimes occur along major roads like MacArthur Parkway and International Boulevard. Some drivers may leave their vehicles unattended and place valuables in their car, increasing the chances of assault and theft. If you practice basic discretion in these areas, you can avoid being a victim of crime.

The Oakland Police Department has more than 1,000 employees, including 740 officers. These officers conduct regular patrols through all areas of Oakland. The Department has recently restored its motorcycle traffic unit, which has issued more than 1,200 citations since November 2022.

The police and community activists in safe neighborhoods in Oakland have been experimenting with new strategies to combat crime. Violence interrupting involves connecting victims of crime with public health resources and counseling, so they do not retaliate after losing loved ones. Activists have credited violence interruption with reducing the Oakland, CA violent crime rate by 8% over the last year.

Niche ranks Upper Rockridge as #4 on its list of best neighborhoods to raise a family in Oakland. Upper Rockridge has walkable sidewalks that are great for dog walkers and strollers.

Upper Rockridge is one of the safest Oakland neighborhoods. The Upper Rockridge Neighborhood Association (URNA) partners with a professional private security company to patrol the neighborhood streets and inform the police of crimes. Residents can contact the patrols to get help and report crimes.

The neighborhood is close to or contains some of Oakland’s best schools. US News and World Report rank Hillcrest Elementary School as the best elementary school in the Oakland Unified School District (OUSD). 88% of students score at or above the proficiency level for reading. 51% of students identify as being in a racial minority group, making Hillcrest one of the most diverse schools in Oakland.

Many retirees enjoy the Claremont Country Club for its beautiful 9-hole golf course, seven tennis courts, and two outdoor pools. If you’re looking for an event venue, you can rent out the Tudor-style clubhouse.

The neighborhood includes part of the Temescal Regional Recreation Area. The park is one of Oakland’s best destinations for outdoor activities. You can swim in the water off a beach, fish on a fishing pier, and hike on paved trails.

Niche ranks Trestle Glen as #8 on its list of best neighborhoods to raise a family in Oakland. 31% of residents live in families with children, so your kids have many opportunities to make friends. Trestle Glen is east of downtown and north of Interstate 580, giving you access to transportation and commute routes.

Many residents consider Trestle Glen to be one of the safest neighborhoods in Oakland. Violent crime is almost unheard of, and most crimes are minor thefts. If you leave valuables in your car, you should put them in a glovebox or underneath your seat to keep them from being stolen.

Lakeshore Avenue forms the western boundary of the neighborhood. It is a major shopping destination in Oakland, with terrific cafes, grocery stores, and nightlife opportunities. The Lakeshore Avenue Business Improvement District organizes kid-friendly events like parades and costume contests that you can enjoy.

US News and World Report rank Yu Ming Charter School as the seventh-best elementary school in California. 94% of students tested at or above proficiency levels in reading and math. All students take Mandarin Chinese immersion classes, so they graduate school as bilingual citizens.

Montclair is well-known for being one of the safest areas in Oakland and one of the best Oakland neighborhoods. The Montclair Neighborhood Council has several crime prevention initiatives that they work with the Oakland Police Department on. Officers regularly patrol the streets and host public meetings to advise residents of crime prevention tips and Oakland crime news.

The neighborhood is northeast of Piedmont. Route 13 runs through Montclair, making access to Oakland and Berkeley easy.

Montclair is on a hill, which makes the streets less walkable than in other neighborhoods, but the neighborhood is close to some of Oakland’s best parks and walking trails. The Montclair Railroad Trail has 1.4 miles of hiking paths you can hike, walk your dog, and bike on.

Montclair Park is right in the center of the neighborhood. It contains play areas that are open for all kids, tennis courts, and softball fields. You can also rent out the grounds for picnics and parties.

The community is best known for its whimsical and storybook-style architecture. You can buy a three-bedroom home at 1,500 square feet for less than $1.5 million.

Worst Neighborhoods in Oakland for Crime

You can experience crime throughout Oakland, but many of the worst crimes occur in the western neighborhoods. This includes the area surrounding Oakland International Airport, though the airport itself is safe.

Oakland neighborhoods to avoid include:

Most crimes in Oakland occur at night, with spikes on Friday and Saturday nights. Try to avoid visiting western and downtown Oakland during these times. During the day, be discreet. Keep your valuables out of sight and park your car in a lot or garage where it is less likely to get stolen.

Oakland’s public transportation system also has problems with crime. Avoid calling attention to yourself, and do not loiter outside or inside a station, especially in bad areas of Oakland. You can get around the city in your car or use ride-share services if you feel unsafe using the train while living in Oakland.

Is Oakland a dangerous city?

Some parts of Oakland are very dangerous. However, the safest areas of Oakland like Trestle Glen are very safe and have elite schools and beautiful parks. You can reduce the risk of being a victim of crime by following basic safety tips.

Why is Oakland’s crime rate so high?

Oakland has many gangs, which leads to a high amount of gang violence within the city. Most of these gangs have access to ghost guns, untraceable firearms that are hard for the police to confiscate. Economic instability from the COVID-19 pandemic is also causing some people to lash out against others and steal to pay the bills.

What is the most dangerous part of Oakland?

Acorn-Acorn Industrial is the most dangerous part of Oakland. 3,068 violent crimes occur for every 1,000 residents. That is 691% higher than the national average.

The Oakland California crime rate is infamous. It is true that Oakland experiences more crimes than the state and nation do. There are Oakland neighborhoods to avoid, even during the daytime, like Acorn-Acorn Industrial.

Yet Oakland is a bustling city with great schools, vibrant parks, and beautiful homes. And despite there being crime in the city, there are safe neighborhoods in Oakland. Communities in northern and eastern Oakland experience far fewer crimes than neighborhoods in western Oakland. As long as you do your research, you can find the perfect home for yourself and your family in the safest areas of Oakland.

Thinking about living in Oakland? AMS Relocation is ready to lend a hand. Get a moving quote today by calling 650-000-0000.