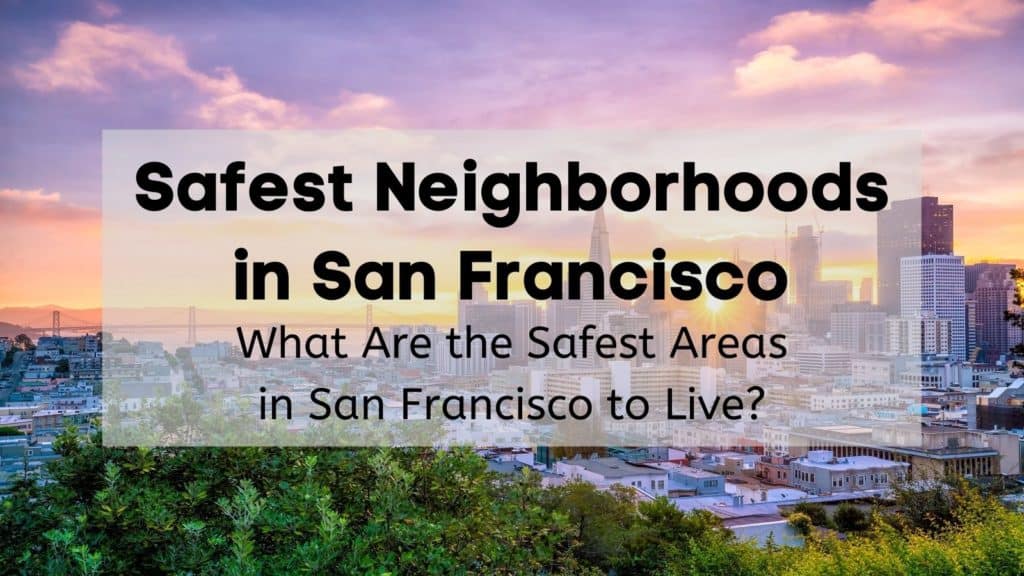 Is moving to San Francisco on the horizon? Whether you’re planning to live alone, moving with kids, or simply want to feel safe and secure, one of your top priorities may be choosing a safe neighborhood with low crime.

Despite its reputation for crime, like many California cities, there are plenty of safe communities in SF. Violent crime is mostly concentrated in a handful of areas with plenty of neighborhoods that offer low crime rates, great amenities, and a close-knit feel. What are the safest neighborhoods in San Francisco? Here’s a look at quick crime stats, the safest areas in San Francisco, and high-crime areas you may want to avoid.

Here are additional statistics and resources to help you understand the crime risk and find safe places to live in San Francisco.

SF Safe, Inc. is an important resource that helps San Franciscans create safer neighborhoods by working with the SFPD on community engagement, crime prevention, and safety services. No matter where you are thinking of moving, you can check the services they offer such as Neighborhood Walk After Dark which focuses on areas of concern and public safety hotspots. They can even perform a free Residential Security Survey to help you identify affordable solutions to make your home more secure.

Ready to explore the safest neighborhoods to live in San Francisco? These neighborhoods have crime significantly lower than the city and the national average. However, remember that even neighborhoods with higher crime can be safe as crime may be concentrated to small areas and sometimes even certain apartment blocks.

Use these San Francisco crime maps to explore reported crime by neighborhood and offense in greater detail. You’ll find other safe places to live in San Francisco by identifying hot spots for crime.

Located on the southern tip of San Francisco next to the Excelsior, Crocker-Amazon is one of the safest San Francisco neighborhoods with family-friendly amenities and the feel of the suburbs. There’s a lot that makes Crocker-Amazon unique, including a location more removed from the city with a more suburban environment than its more well-known neighbor, Excelsior.

It’s also a bit more affluent, but it’s still a racially and culturally diverse neighborhood with a major Filipino community. You’ll also notice that Crocker-Amazon is mostly single-family homes. In the southern part of the neighborhood, homes even have 10 feet or more on either side, a rarity in SF with most homes having gaps of just inches!

What makes it one of the most desirable safe areas of San Francisco? Its great amenities. You’ll find commercial areas on Mission Street and Geneva Avenue bordering the community. Families love McLaren Park bordering the community. This 312-acre park has a swimming pool, walking trails, golf course, and several playgrounds including the Crocker Amazon Playground with a clubhouse, dog area, and game courts.

If frequent fog isn’t enough to turn you away, you’ll fall in love with Outer Sunset, one of the most desirable SF communities and one of the safest places to live in San Francisco. This large neighborhood is on the western shore and bordered by Golden Gate Park to the north and the ocean to the west. It’s as far away from the city center as you can get and famous for its gorgeous sunsets and coastline popular with surfers who flock to Ocean Beach.

You’ll find some commercial areas but mostly modest single-family homes with a unique, laid-back vibe and a population of more than 60,000. Just be ready to embrace the fog: this is the foggiest neighborhood in the Golden City.

South of Golden Gate Park and east of Outer Sunset is the neighborhood of Inner Sunset. This community is off the shore and includes the communities of Forest Knolls and Golden Gate Heights. It’s actually more expensive to buy a home in this neighborhood than its oceanfront neighbor. It’s one of the safest areas in San Francisco with almost non-existent violent crime.

Inner Sunset is home to the University of San Francisco Parnassus Campus and the Mount Sutro Open Space Reserve, a peaceful preserve with trails through lush forests. The neighborhood also has great neighborhood parks and the world-famous Golden Gate Park. It’s easy to see why it continues to attract students, families, and anyone who appreciates nature to its foggy streets. If you live in the northern part of the community, attractions like the San Francisco Botanical Garden and Koret Playground are within walking distance!

Located in central SF, Noe Valley is one of the most desirable and safest neighborhoods to live in San Francisco for young families. It’s even known to locals as “Stroller Valley” thanks to the high share of households with young children. If you’re looking for one of the safest neighborhoods in San Francisco to raise a family, you’ve found it here.

Because it’s surrounded by hills, Noe Valley is one of the sunniest places in the city, even when the rest of the city is shrouded in the Bay’s famous fog. The neighborhood is known for its charm with no chain stores, only small boutiques, bakeries, toy shops, and several parks and playgrounds.

Want a safe place to live in San Francisco near the shore, family-friendly amenities, and top attractions? Don’t overlook the low-key neighborhood of Outer Richmond. Sandwiched between the Presidio of San Francisco, Lincoln Park, and Golden Gate Park, you’re within walking distance of the city’s most famous and picturesque attractions like the Legion of Honor art museum, the Lincoln Park Steps, and the famous Sutro Baths. You’ll enjoy not only a safe community that feels removed from the busy city but the most fantastic views in the city right around the corner.

Excelsior – One of the Most Diverse & Safe Neighborhoods in San Francisco

Excelsior is one of the safest neighborhoods in San Francisco, even though its crime rate is still a bit high compared to the national average. In exchange for a bit more crime than other neighborhoods on this list, you’ll enjoy a bustling urban neighborhood packed with amenities and things to do.

Located next to Crocker-Amazon and John McLaren Park and enclosed by Highway 101 and I-280, Excelsior is one of the most diverse communities in San Francisco. The neighborhood has a very close-knit feel and plenty of attractions for families like the John McClaren Park and St. Mary’s Rec Center and Playground right outside the community with SF’s largest inclusive playground. Millennials and downtown commuters appreciate the nearby highways, short 6.5-mile commute to the Financial District, and public transportation options to the nightlife and shopping of surrounding areas.

Still haven’t found the right community to call home? Check out these other safe places to live in San Francisco.

SF is home to many safe places to live, but there are some bad areas of San Francisco with violent crime rates far above the city and national average. 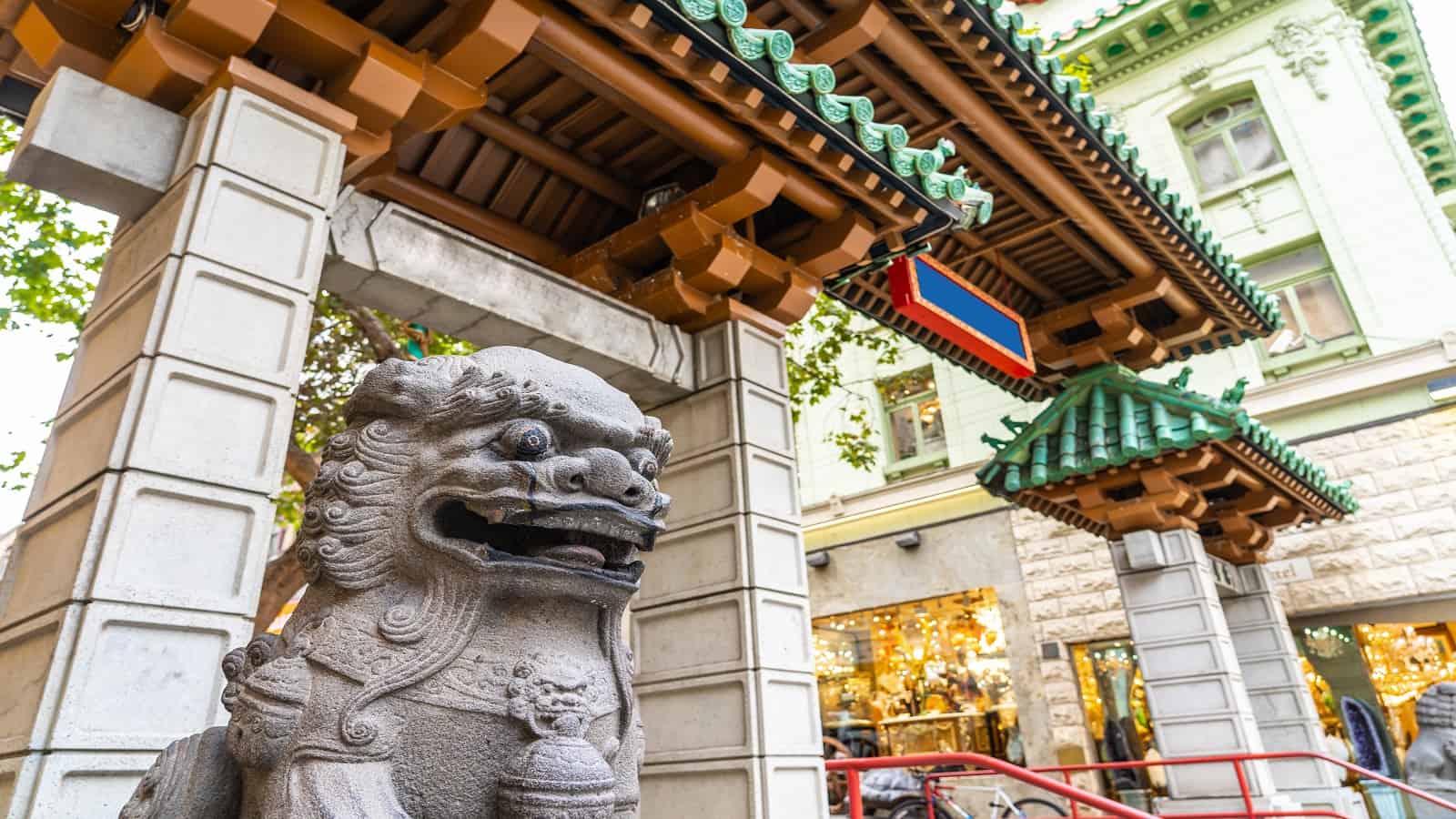 Remember that most violent crime in SF is concentrated in just a handful of areas like the Central Market/Tenderloin (CMTL) area which has 3x more crime than the overall city crime rate. There are many safe neighborhoods in San Francisco where you do not need to worry about your safety aside from taking precautions like locking your doors and windows and remaining aware of your surroundings.

One of the most dangerous areas of San Francisco is an area of downtown called Tenderloin. This neighborhood is in the flatlands on Nob Hill’s southern slope and it’s infamous for its gang crime, drugs, and large homeless population. Out of 665 violent crime plots identified by police in the city, seven of the top ten were in Tenderloin.

Is it safe to live in San Francisco, California?

Like most California cities, San Francisco has a high crime rate above the national average. However, there are many safe places to live in SF with crime significantly lower than the city and national average.

Like most large cities, crime in SF is concentrated in the downtown area, especially the area called Tenderloin. While generally safe during the day if you avoid the worst areas and remain aware of your surroundings, be cautious at night, even in tourist areas.

What parts of San Francisco should I avoid?

The most dangerous areas of San Francisco include the Tenderloin district in downtown SF, the Mission District, Bayview-Hunters Point in southeast SF, and the Castro District.

Have you chosen a beautiful and safe San Francisco neighborhood to call home, or settled on living in the San Francisco suburbs? Once you’re ready to make your move, call AMS Relocation for a free moving quote from the premier packing and moving company in the Bay Area.