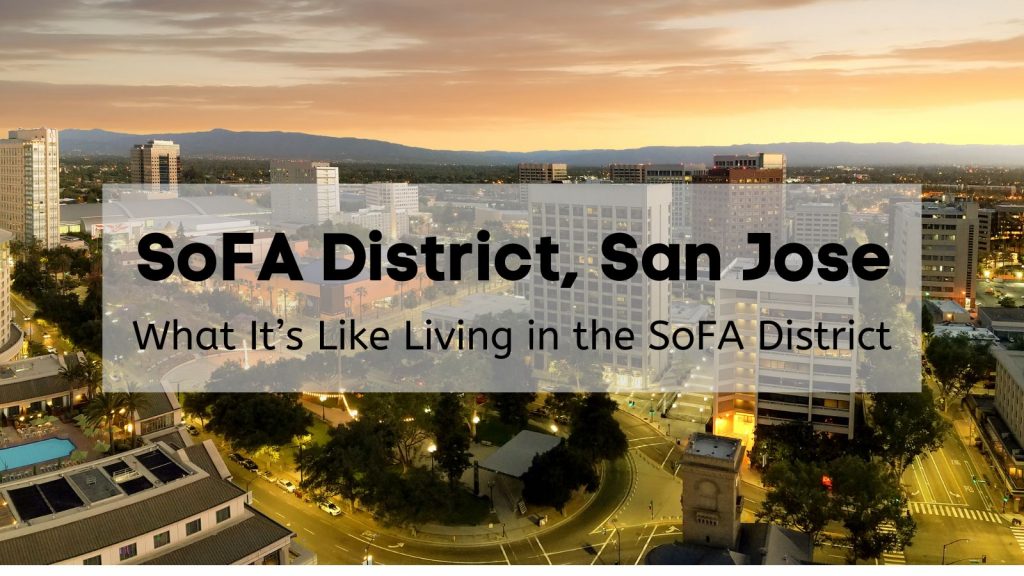 Want to enjoy San Jose living at its best? South of First Area, better known as SoFA, is one of the most exciting San Jose districts with the city’s top entertainment and cultural attractions. The SoFA District is known as “Silicon Valley’s Creative District” and the cultural, entertainment, and arts district of San Jose. Just outside downtown, it’s Here’s why moving to SoFA San Jose is a great idea!

Where Is SoFA District, San Jose?

The San Jose SoFA District is in Central San Jose at the far south end of downtown San Jose where South First Street and Market meet. The neighborhood covers roughly eight blocks between W Santa Clara St, South Second St, and the intersection of Highway 87 and I-280. Part of downtown, SoFA San Jose is bordered by Paseo and, just beyond it, San Jose State University.

During the California Gold Rush of the 1850s, thousands of Chinese immigrants were drawn to the West Coast seeking prosperity and a means to support their families. When their dreams were dashed, and anti-Chinese policies and racism prevented them from buying property or living in most areas of the city, South of First Area became home to the first Chinatown. Located at Market St & San Fernando St, the First Market Street Chinatown was built in 1866 but burned down just four years later. It was rebuilt nearby but once again burned down.

A third Chinatown was built at the site of the modern-day Signia by Hilton (formerly the Fairmont Hotel). At the time, it was home to over 1,400 people, plus a temple, theater, restaurants, and shops. Like the previous San Jose Chinatowns in SoFA, it was also the victim of arson after the city voted to demolish it following the 1886 Anti-Chinese Convention.

Afterward, many of San Jose’s Chinese residents left the city, some remaining in the Bay Area and settling in San Francisco. A final Chinatown was built near the present-day Japantown neighborhood with the help of a German immigrant, John Heinlen, this time with an 8-foot fence and foot patrols. Nicknamed Heinlenville, the last Chinatown in the city survived until 1931, when the community slowly died out as Chinese immigrants were barred from the country.

For years, the area was neglected, but the modern-day SoFA District got its start in the 1990s when independent businesses began moving in. As the number of galleries, art studios, design firms, theaters, and clubs began to grow, Silicon Valley’s Creative District was born.

Today, SoFA is one of the most rapidly developing neighborhoods in San Jose and one of the hottest markets for renters. It’s one of downtown’s most affluent neighborhoods with a median household income of $82,500. The SoFA district population is about 3,000, a number that has grown significantly over the past ten years thanks to several large luxury apartment and condo developments. While many worry about gentrification erasing the community’s culture and what makes it so unique, you’ll definitely see after moving to the San Jose SoFA district that the arts scene is alive and well.

What’s it Like Living in the San Jose SoFA District?

South of First Area is one of the best neighborhoods in San Jose for young professionals and singles, thanks to its vibrant, walkable, and diverse community. By day, SoFA is bustling with artists in the community’s many art galleries and artist spaces, young professionals working downtown and at nearby offices, and residents grabbing a bite and coffee at one of several local coffee shops. By night, the streets are packed with a younger crowd enjoying local nightclubs, hip bars, and nearly one dozen music and performing arts venues.

While living in SoFA San Jose, you’ll never miss sight of the neighborhood’s artistic and cultural roots, which are apparent on every corner. The central plaza, Northern California’s oldest public space, is a popular gathering spot where you can people watch, take a stroll, and enjoy a bite at several local restaurants. It regularly hosts performances, food festivals, and other community events right in your backyard. Nearby, you’ll see the historic San Jose Chinatown marker, a reminder that SoFA was once home to several of the five Chinatowns in San Jose.

The San Jose SoFA district is a place where you can truly live, play, and work with all the amenities you need to live car-free if you choose. Downtown San Jose is blocks away, but there are many job opportunities in the small community, including the Adobe World Headquarters and several business parks. There’s even a WeWork office space & coworking space.

Things to Do in the SoFA District – Top Attractions, Restaurants & Shopping

South of First Area is home to some of the top San Jose attractions not to mention amazing restaurants, nightlife, and cultural attractions. Here’s a quick guide to what to do in the SoFA District as a new resident!

After moving to the SoFA District, you’ll quickly notice the Plaza de Cesar Chavez is the neighborhood’s heart. You’ll spend a lot of time at this busy public space with regular festivals, concerts, and events. It’s surrounded by two large hotels, eateries, and major landmarks of downtown San Jose, including two museums and performing arts theaters. There’s seemingly a SoFA festival every month with popular events like the Subzero festival, SoFA Sundays, the SoFA Street Fair, and South First Fridays attended by tens of thousands.

The gorgeous San Jose Museum of Art features contemporary and modern art focusing on West Coast artists with rotating exhibits. Across the plaza is The Tech Interactive, a technology and science museum with labs, interactive exhibits, design challenges, and an IMAX Dome Theater. Cathedral Basilica of St. Joseph, just across from the plaza, is a striking San Jose landmark and named for the city’s namesake.

The Guadalupe River runs through the western side of the SoFA District. The 11-mile Guadalupe River Trail along the banks of the river is a scenic bike and pedestrian trail that stretches through most of the city. Just across the river is the Children’s Discovery Museum of San Jose (CDM). The 52,000 SQ FT museum features interactive exhibits, 28,000 SQ FT of gallery space, an outdoor nature play area, and five performing and visual arts spaces. It’s been called one of the world’s top five science centers and one of the top 10 children’s museums in the U.S.

The adjacent Discovery Meadow is a green lawn that hosts summer festivals and community events. Be sure to play a game at Monopoly in the Park, a giant 930 SQ FT granite Monopoly board. You can book the Monopoly board through the website, which includes a rental of the custom game pieces and park features – it’s perfect for a unique birthday party or gathering with friends!

Some of the best Downtown San Jose restaurants are right in SoFA! Here are some of the most exciting restaurants and cafes to check out in your new neighborhood.

South of First Area is home to dozens of art galleries and studios, music venues, theatre companies, and performing arts venues. It’s also home to the San Jose Opera, Silicon Valley Symphony, San Jose Jazz, and the California Philharmonic Youth Orchestra among many other groups and organizations. Here are just some of the best places to enjoy culture, music, and art in SoFA.

Living in SoFA San Jose puts you in the heart of San Jose’s nightlife! Here are just some of the best clubs and bars in the SoFA District.

Moving to SoFA San Jose with kids? You will be served by San Jose Unified School District, which has more than 30,000 students enrolled in 41 schools. Students living in South of First Area are served by the following schools:

Lincoln High School boasts an AP participation rate of 77% with a 95% graduation rate.

There are also many private schools in Downtown San Jose to choose from, including Notre Dame High School in SoFA, a Catholic girls’ college preparatory school.

Overall, San Jose is a safe place to live and one of the safest big cities in California. which has higher crime than average for the U.S. The Downtown San Jose crime rate is 211% above the city average, with 1,322 violent crimes per 100,000 people. However, most people find downtown and the SoFA District is a safe place to live. Remember that a lot of the violent crime like assault is attributed to the nightlife in the area, including bar fights, not random violence. This means it’s generally easy to avoid being the victim of crime and you can feel safe walking around the SoFA area.

Still, because it’s an urban, downtown neighborhood, make sure you always lock your car and don’t leave valuables in your vehicle, even in your building’s dedicated parking area.

Ahead of moving to the San Jose SoFA District, you’ll want to understand your housing options. The small SoFA District has very few options for buyers but many apartments, including new luxury high rises.

If you want to buy a home, the nearest condos for sale in San Jose, CA are Paseo Plaza with 2-bedroom units priced in the $700s and the Axis which has studios starting in the $500s, 2-bedroom units around $1 million, and penthouses priced around $2 million. The 88 Downtown San Jose condos are also nearby. The 88 is a 22-story development and the tallest residential high-rise between LA and San Francisco, known for its excellent amenities. Studio apartments start in the $500s.

If you’re going to be living in the SoFA District, you’ll almost certainly be renting. The average SoFA San Jose rent is $3,010, a bit higher than the city average of $2,972. You’ll find a wide range of options including several recently built Downtown San Jose apartments right in the heart of SoFA. Here’s a quick overview of your options for SoFA District apartments.

Does living in South of First Area sound like exactly what you’re looking for? Give us a call at AMS Relocation for a free, personalized moving estimate from the best movers in San Jose.