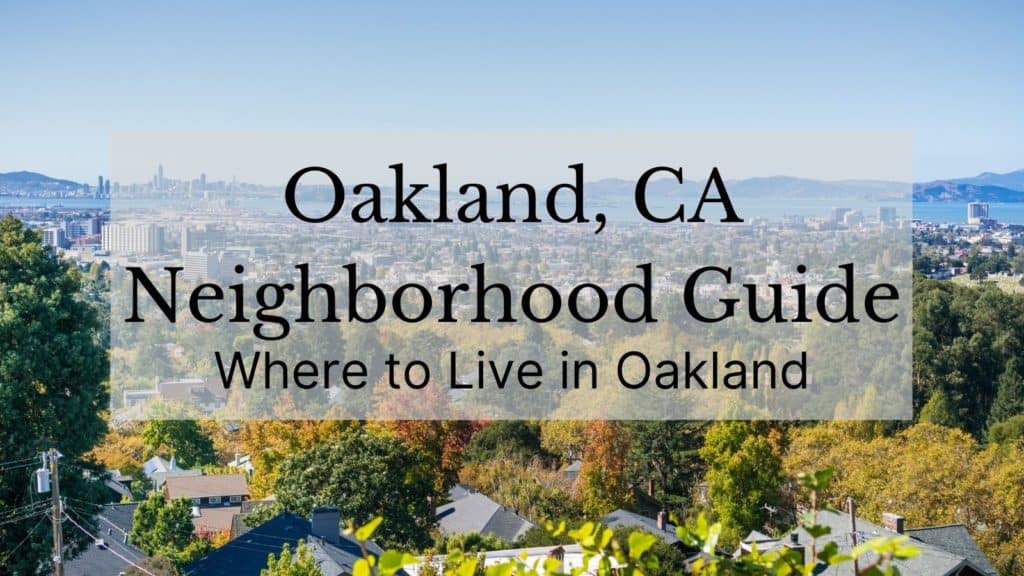 Oakland CA Neighborhood Guide 🏡 | Where to Live in Oakland [List]

Is Oakland a good place to live? While San Francisco may get a lot of attention for its exciting attractions and fun nightlife, you’ll get many of the same amenities in Oakland with a lower cost. Oakland is home to dozens of attractive neighborhoods perfect for singles, young professionals, families, and more. With quick access to Silicon Valley and other parts of the Bay Area, it’s an appealing location for employees who want to save money without being too far away from their job. Which Oakland neighborhoods are the best? Here’s a look at the top picks. Unlike Oakland suburbs such as Piedmont, these neighborhoods are all within the Oakland city limits.

Just be aware that Rockridge has a very competitive real estate market. Homes go quickly in this gorgeous neighborhood so be prepared to make your strongest offer quickly!

Temescal is located in North Oakland around Telegraph Avenue near Rockridge, Piedmont Avenue, and Santa Fe. It’s rapidly gentrifying and it’s one of the most exciting neighborhoods in Oakland for singles thanks to its hipster vibe and art scene. Telegraph Avenue is a popular destination for visitors thanks to its bustling breweries, restaurants, boutiques, and overall unique character. Temescal is a place you can actually enjoy hanging out. There’s even a convenient BART station on 40th Street.

Homes in Temescal are mostly 2- and 3-bedroom Mediterranean-style or Craftsman bungalows from the 1920s with a few apartment buildings and converted condos. Home prices in this fun Oakland neighborhood have skyrocketed in recent years thanks not only to increased demand for Oakland housing but more specifically the community’s growing scene.

Love to be close to the action? If you’re looking for urban living with entertainment, restaurants, and culture just a short walk away, you’ll love downtown Oakland. The downtown area has been revitalized over the last two decades and it’s now a thriving city center. It’s also slated for new development to triple housing with 43,000 new units by 2040, including up to 7,300 affordable housing units.

Downtown Oakland has several areas like Old Oakland which is home to a large retail area and Uptown which is the entertainment center. The neighborhood has a diverse and eclectic feel with beautiful examples of architecture from the 1800s including Art Deco and Gothic Revival buildings. The most recognizable icon of downtown is The Cathedral Building, the first Gothic Revival skyscraper in the West.

What makes Montclair one of the best areas to live in Oakland for families? It’s hard to know where to start! This quiet residential neighborhood, sometimes called Montclair District or Montclair Village, is located on the western slope of the Oakland Hills. It’s largely residential with plenty of trees and beautiful scenery among winding roads. You’ll even be next to some of the top hiking spots in Redwood Regional Park. Families flock to Montclair for its great schools like Montclair Elementary School and Skyline High School.

While it’s certainly one of the most expensive neighborhoods in Oakland, there are a range of housing options including apartments and small homes in the center of the community and large mansions in the hills. You’ll find beautiful Danish-style, Tudor, and Mid-Century homes with a large price range.

Looking for an affordable Oakland neighborhood? They’re in short supply, but one of the best places to try is Lake Merritt. The name refers not only to several residential neighborhoods but also the lake itself, technically a tidal lagoon, directly east of downtown Oakland.

Lake Merritt was once a rather run-down part of town, but it’s been revitalized and the lagoon has been cleaned, transforming it into a fun and vibrant community. It’s one of the cheapest places to live in Oakland with plenty to see and do. Lake Merritt is home to families, young professionals, artists, and outdoor enthusiasts who appreciate close access to both the outdoors and downtown.

Lake Merritt is a tricky neighborhood to define. It’s sometimes used to refer to the Merritt neighborhood specifically, but it can also refer to all of the neighborhoods around the lake like Lakeside and Adams Point.

In Lakeside, homes are more affordable with apartment and condo options starting in the high $400s. Along with upscale apartments, you’ll find affordable housing in this safe community. Note that the Grand Lake and Adams Point area on the northside of the lake is the hipper area with bars, stores, and restaurants but it’s the farthest from the BART station. The northeast side, including Trestle Glen and Cleveland Heights, has a more residential feel. The area to the south of the lake also has a lot of shopping, restaurants, and services with convenient access to the Lake Merritt BART Station.

Last but not least, don’t overlook Crocker Highlands, a unique neighborhood in Oakland that’s often overlooked. This small community, nestled north of the MacArthur Freeway near Lakeshore and Montclair, is one of the safest neighborhoods in Oakland. It’s also one of the most charming!

Crocker Highlands is a walkable neighborhood with authentic 1920s street lamps, English-style gardens, and gentle, rolling hills. Homes in the neighborhood run the gamut from Art Deco and Arts and Crafts to Spanish-style and Tudor homes. Crocker Elementary School is also one of the top schools in Oakland which makes this community a top pick for young families.

Now that you’ve explored some of the best areas to live in Oakland, have you decided where you’re moving? With moving day on the horizon, give the friendly Oakland movers at AMS Relocation a call for a free quote. We’ll get you settled into your new home without the stress and hassle!