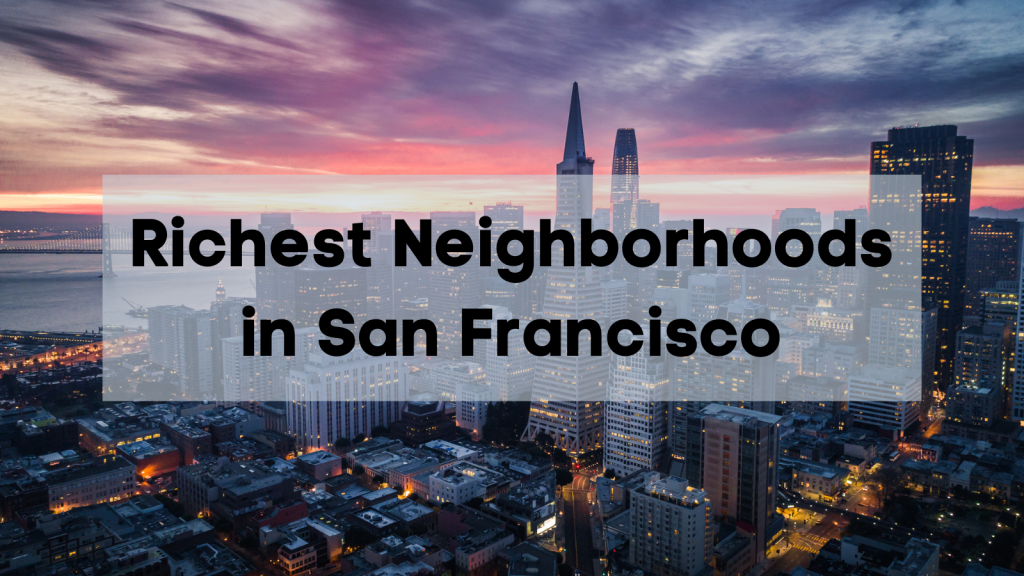 When people think about San Francisco, they often think about the most notable attractions, such as the Golden Gate Bridge, Lombard Street for the windiest roads, Alcatraz Island, or even the house from the famous show Full House.

There are plenty of things to do like ride the well-known rail cars, walk the streets and window shop, or check out some of the local attractions.

When it comes to housing in San Francisco, it’s no secret that they are some of the most expensive houses on the market, but what’s the difference between being rich and wealthy? While both sides have an abundant amount of money, often more than the average person, being rich is when you will buy whatever you want and throw your money into physical objects. When you’re wealthy, you save and invest your money while living at or below your means.

If you’re interested in moving to San Francisco, we have everything you need to know. Click here.

Throughout this list, we are only sharing the top 10 richest neighborhoods in San Francisco. The population data and the household income will come from the US Census, while the housing data will come from Redfin.

Here are the top 10 richest neighborhoods in San Francisco, CA:

In the 1700s, Potrero Hill was originally named Potrero Nuevo, which means “new pasture,” by the Spanish missionaries because of the landscape.

Located near the eastern side of San Francisco, the South of the Market (SOMA), and east of the Mission District, you will have beautiful views of the city skyline from this neighborhood.

Family-friendly, classic Victorian homes and beautiful skylines are just a few things that make this neighborhood special. Potrero Hill is considered one of the best places to live in California, and there are plenty of bars, live music venues, restaurants, and parks to check out.

Some of the most notable places include: Potrero Hill Recreation Center, Chez Maman East, Anchor Brewing Company, Plow, and Bottom of the Hill.

To this day, Nob Hill in San Francisco is known for being one of the wealthiest and most desirable areas to call home. Known for its luxurious hotels, beautiful parks, art galleries, restaurants, and boutiques, Nob Hill is historically known to be the go-to place for the upper class.

Before the 1850s, the original name of this neighborhood was California Hill, but when the Central Pacific Railroads Big Four (aka Nobs) came to town and built their mansions, it was later renamed Nobs Hill.

Nob Hill is one of the safest and family-friendly areas within San Francisco. Some of the most notable attractions include the San Francisco Cable Car Museum, Grace Cathedral (largest house of worship within SF), Tonga Room & Hurricane Bar, Top of the Mark, and Huntington Park.

The homes available in Nob Hill are luxurious Craftsman-style houses mixed with a modern twist. For this neighborhood, you can expect the median house price to be around $1,298,500, and the average time the homes are on the market is 35 days.

Known for being a quaint yet upscale San Francisco neighborhood, Russian Hill is a kid-friendly and safe space to set up roots and raise a family.

It’s a dense urban community and is best known for Lombard Street— one of the windiest streets throughout the world. This tourist attraction, along with the Golden Gate Bridge, makes Russian Hill one of the top places to visit in San Francisco, CA.

If you move to Russian Hill, you want to check out Ina Coolbrith Park, Swensen’s, Seven Hills, and Cobb’s Comedy Club.

The median house is getting sold for $2,025,000 in Russian Hill, and the average time on the market is 13 days. While there are a large variety of architectural designs in Russian Hill, here are some of the most common styles: Classical Revival, Mission Revival, Colonial Revival, Craftsman, and Late Italianate.

The Financial District is the heart of the city for businesses. It’s the New York of San Francisco, aka “Wallstreet of the West,“ with skyscrapers and well-known companies in every direction that you turn.

There are plenty of opportunities for public transportation in this area, so if you don’t want to drive, you can still get around town. With many businesses working in this district, you will always find a happy hour deal nearby.

Some of the places that stand out in the Financial District are the following: Ferry Building, Ferry Plaza Farmers Market, Tadich Grill, and San Francisco Railway Museum.

The homes here in the Financial District are high-end, luxurious, and modern. There is a mixture of high-rise condos and single-family homes. The median home price is $685,000, and it’s a competitive market–homes sold 43 days from being listed.

What started as a marshy and swamp-like area has grown into one of the favorite spaces in San Francisco. Right on the northern shore, the Marina District has beautiful views with an abundance of grassy parks like the Marina Green, running or biking paths, and one-of-a-kind views of the Golden Gate Bridge and Alcatraz island. You will never get tired of the beauty in this community.

The crime rate is low, and this neighborhood is a place for young professionals or families looking to settle down and plant their roots.

Spend your nights trying the abundant restaurants and bars in the area like Mamanoko, Souvla, A16, and Blackwood. Or exploring The Palace of Fine Arts and The Unreal Garden.

If you’re looking to purchase a house in the Marina District, the median price for a home is $2,528,000. On average, the houses are on the market for 15 days before getting sold. 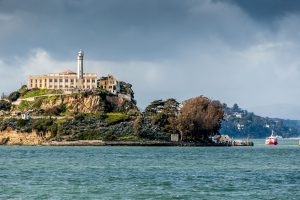 If you love large luxury houses and gorgeous views of the ocean, then Sea Cliff is the neighborhood for you. It’s part of the planned residence parks designed by Mark Daniels, a landscape architect.

Some other famous residents in this neighborhood include Robin Williams, Eugene Levy, Jack Dorsey, Sharon Stone, and Linda Rondstadt.

While there is a wide variety of home styles in Sea Cliff, some of the most common include mid-century modern, traditional, and contemporary. On average, the homes are on the market for 14 days, and the median home price is $3,500,000.

If you’re looking for fun activities for all ages, check out the Golden Gate Park, San Francisco Museum of Modern Art, or China Beach.

What started in 1912 as a small neighborhood for the upper-middle class, St. Francis Wood, has grown into a beautiful community and has officially gotten written in the National Register of Historic Places on June 30th, 2022.

While this neighborhood is known for residents being wealthy, it doesn’t get as much media on it as Pacific Heights or the Marina District, so if you like to live in a quiet area, away from the hustle and bustle of the city, this neighborhood would be perfect for you.

If you’re looking to purchase a house, the median sale price is $4,025,000, and the most common architecture includes designs similar to Italian villas, traditional and modern yet elegant designs.

While most of the activities aren’t within the district itself, there are plenty of fun things to do near St. Francis Wood. These include: The San Francisco Botanical Garden, Mt. Davidson Hiking Path, Sava Pool, and Stern Grove Playground.

Haight-Ashbury is known for embracing the “historic hippie vibe” because of the variety of vintage boutiques, record stores, and beautiful Victorian houses that are so well-preserved they look new. This neighborhood prides itself on the diverse crowd that lives here and on being a place that can be home for anyone. The median home price is $1,585,000.

One of the most common community events in the summer is the Haight-Ashbury Street Fair, where thousands of different people come together, listen to music, and shop at the vendor booths. Other things to do are Club Deluxe or exploring more of the city with the Streets of San Francisco Bike Tours.

Pacific Heights was developed in the 1870s and has been a pinnacle area within the community of San Francisco ever since. With stunning panoramic views of the Golden Gate Bridge and the bay, Pacific Heights was named one of the most expensive places to live in the United States. Even though it might be expensive, it’s a prestigious, safe, and family-friendly neighborhood.

The homes are elegant and sophisticated with beautiful Victorian designs. If you’re looking to purchase a piece of property, you can expect to pay over a million dollars as the median sale price is $1,512,500. This indeed is an affluent SF neighborhood.

There are plenty of famous homes to check out in this neighborhood. Like if you’ve seen Mrs. Doubtfire, you have the opportunity to come to the house and take photos. Or check out this famous home turned museum, the historic Haas-Lilienthal House.

Presidio Heights is known for its tree-lined streets and the serene atmosphere of the family-friendly neighborhood.

With a beautiful park right next door, the whole family will have fun outdoor activities to do.

The homes are high-end and are a median price of $3,550,000, only lasting 18 days on the market before getting sold. The architectural design for the houses is based on the Edwardian style and has been around since the early 1900s.

There’s so much excitement around moving to one of the San Francisco’s richest neighborhoods, and AMS Relocation is here to help make the process seamless. As an award-winning Bay Area moving company, we have been providing top-rated relocation services for the last 65+ years. Call us today at (650) 000-0000 for a free estimate!