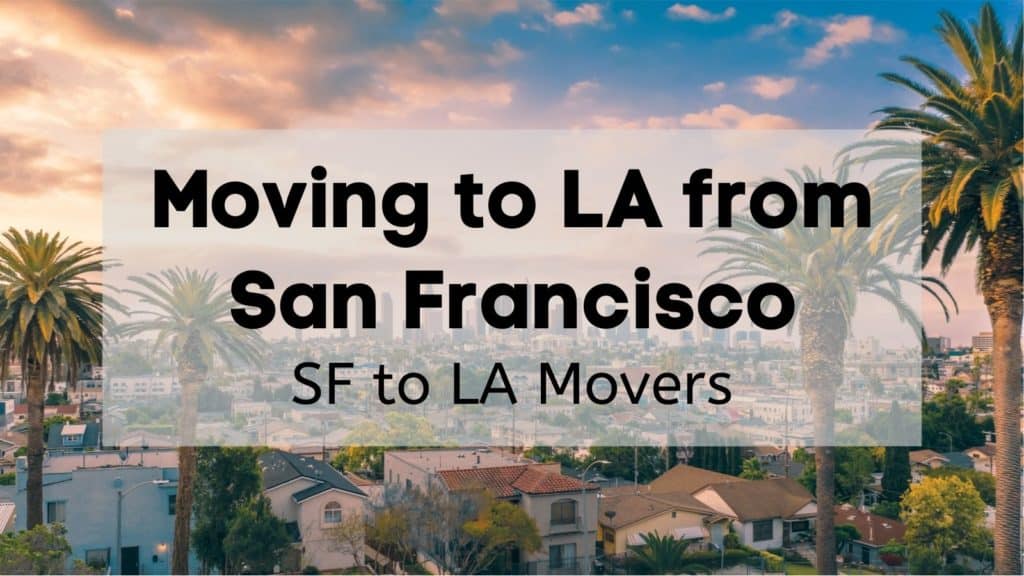 San Francisco and Los Angeles are two of California’s best known cities, if not the best known cities in all of the United States. Despite occupying a similar spot in the minds of many who know about them, they are radically different communities, as a local of either could easily tell you! The reasons for undertaking this kind of relocation are numerous, and whether it’s family matters, financial matters, or some other reason, it’s going to be quite the undertaking. That labor can be made that much easier by knowing all the facts before you move – something this moving guide aims to help you with!

Los Angeles will need little introduction for most. The largest city in California, both in size and population, Los Angeles has an economy that is more productive than some countries, and is home to American cultural landmarks like Hollywood. As a pair of Californian cities, both enjoy California’s wonderful mediterranean weather, although SF’s more northerly position means it can get a lot colder there, while LA has the tendency to get much hotter and muggier during summer months. Los Angeles could reasonably be considered less “hip” than San Francisco, a city known for its young, tech-savvy population, but Los Angeles’ previously mentioned cultural heritage more than makes up for it. The rich history and surplus of attractions is a primary reason for why people move to Los Angeles!

The population of Los Angeles is 3,979,537 people, excluding communities like Long Beach and Riverside that are generally considered to be part of LA, and the population density is around 8,400 residents per square mile, lower than the density of San Francisco. The median household income is $67,418, and the median home price is $697,200, which, though certainly very expensive, is actually relatively cheap compared to San Francisco. Like most of America’s biggest cities, LA is a city of renters – 69% of residents live in a rented unit, in fact. According to Rentcafe, the average rent here is $2,563 per month.

Benefits of Moving from San Francisco to Los Angeles

As we said, people move away from San Francisco for all sorts of reasons. Employment, finances, and crime are all good motivators to seek greener pastures, and greener pastures LA has in spades. However, San Franciscans will have to get used to some things in their new home that they might not think about at first.

For one, LA is truly massive on a scale that’s hard for anyone to comprehend, even someone from a city as big as SF. The city itself, without factoring in suburban and other peripheral communities, is over 400 square miles. The metropolitan area of LA bumps that number up to a whopping 4,800 square miles. This is good for fostering a wide and diverse array of communities, but a drawback is that LA is a city that relies much more heavily on road transportation and cars than San Francisco, which can be easily navigated by public transport.

Don’t let Los Angeles’ lack of walkability dishearten you too much, as there’s plenty of reasons to want to live here over San Francisco. The primary one is crime. Although LA certainly has a crime problem, as any big city nowadays does, the crime rate there is fairly typical for California, and in a metropolis so massive, the variation by area is immense. Meanwhile, San Francisco has a crime rate that is nearly double that of LA (6,175 crimes per 100,000 compared to 3,115 crimes per 100,000), which can be felt over nearly every part of the SF metropolitan area. San Francisco’s poor reputation for crime is no secret.

Whether your mind is set on making the transition from SF to LA or not, you’re going to need help, and lots of it. Moving between big cities, even if they’re in the same state, is an endeavor that is complicated and stressful. But that experience can be made far less so by enlisting the help of a reliable and professional San Francisco to Los Angeles moving company! The benefits are too numerous to count, but here are some:

Without the aid of a top SF to LA mover, things can quickly become difficult in ways you wouldn’t possibly have thought of. Sure, it might save you a little bit of money, but the tradeoff of having to handle packing, assembly, driving, and other laborious tasks by yourself just isn’t worth it – trust us!

Selecting the right moving company for the job can be just as hard as moving itself sometimes. There are many crews out there who overcharge and underwork, or are just plain incompetent. Don’t hassle yourself with the hunt for a good team to take care of your relocation, because AMS Relocation is here to help!

AMS Relocation has been helping folks with their moves in the area for over seven decades, as we were founded all the way back in 1949! All that time, we’ve done everything in our power to make our customers happy, and our customers agree that we’re the best for the job – just check out our reviews on Google! Our company has all the proper licensing and insurances, and our customer service is unmatched. Our crews are ready to help, all you need to do is give us a call!

So, you’ve decided to use a mover (hopefully us!) in your journey. The question that naturally follows is: how much will it cost you? The cost of a move is something that varies widely based on a few factors:

According to Thumbtack, the average cost for a long-distance, professional move is approximately $4,000 or so dollars. However, the only way to know the price you’ll pay for absolute certain is to give your moving company of choice a call, or fill out a quote form, usually offered online and for free.

If you’re planning on moving to Los Angeles from San Francisco, you’re obviously going to need to get yourself over there somehow, and it’s more likely than not going to involve either driving, flying, or going by train.

Driving is the typical option for interstate travel in California. The most straightforward route is 380 miles and will take you over five hours, in ideal traffic conditions. If you want to stop along the way, Bakersfield is just off the highway, and the Sequoia National Park is also just a short detour off the path.

If you’d prefer something a bit faster and more direct, flying is an excellent option. Both San Francisco and Los Angeles have well-sized airports, and the typical flight between them will take an hour and a half.

The train is another option, usually the most affordable of the three if the cost of the car is factored in. Amtrak provides all-day routes between San Francisco and Los Angeles.

We at AMS Relocation wish you the best of luck in your moving journey, and would love to help you make it a simpler process! If you want the best San Francisco to Los Angeles movers in the state, just give us a call at 650-000-0000, or fill out our free online quote form!