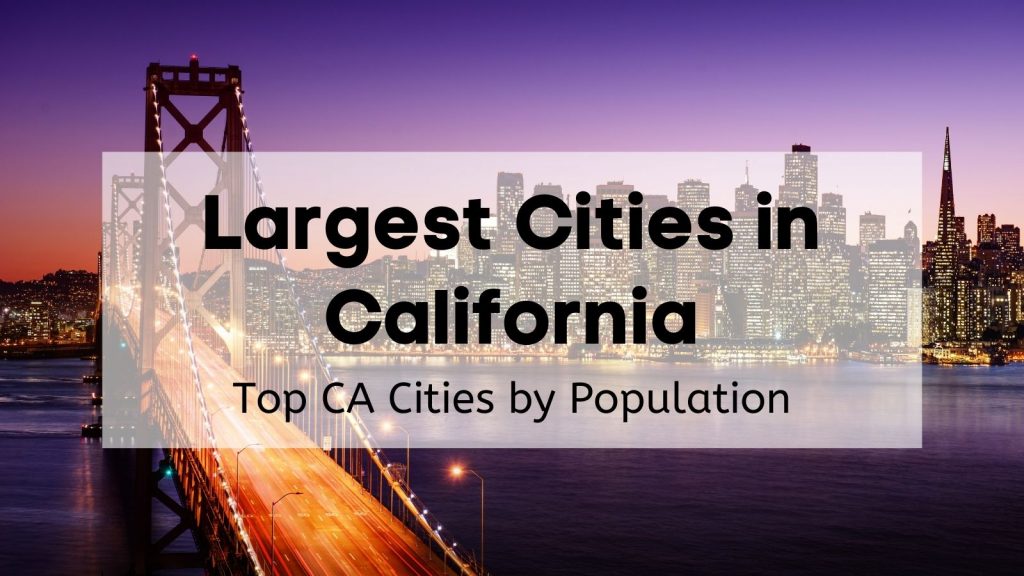 Trying to decide which city in California to call home? You’ve found a great place to start! It can be a difficult decision since there is a wide range of amazing cities that offer so many great amenities in California. But we want to help! That’s why we’ve compiled a list of the top ten largest cities in California and go into detail on what they offer, the population, median age, house prices, and so much more. That way you can decide which city suits your and your family’s needs.

Note: All data comes from the US Census.

Before you begin looking at the largest cities in California, we wanted to give you some general demographics of the state of California. With this information, you’ll be able to compare the statistics of each city to the general population of California.

First on our list is the city of Los Angeles. Located in Southern California, L.A. is known for being the center of the nation’s film and television industry. It is the most populated city in California. Here, you can find famous Hollywood sign and television studios, such as Paramount Pictures, Universal, and Warner Brothers.

When you live in Los Angeles, it’s hard to justify staying home since there is ALWAYS something to do. Whether it be museums and art exhibits or festivals and beaches, there’s something to make everyone happy. There is plenty of outdoor recreational activity, too. L.A. is surrounded by mountains, deserts, and beaches. Plus, with pleasant weather year-round, you’ll be able to enjoy all of it any time of year. On top of that, the food scene in L.A. is almost unbeatable. In fact, Los Angeles is consistently ranked one of the best food cities in America. Living in L.A. means living with dreamers, anxious for opportunities to pursue creative fields outside the 9-5 corporate world.

Second on our list is sunny San Diego. With a 70-degree average temperature year-round, you’ll experience the perfect weather almost every day of the year. Since it’s beautiful almost every day, you’ll be able to experience all of the outdoor activities in San Diego. Think everything from hiking and biking to fishing, snorkeling, and surfing. One huge bonus of San Diego is being minutes away from beach accesses. There’s also the famous San Diego Zoo and botanical gardens to check out, too.

The food and drink scene in San Diego is not lacking, either. Something a lot of people might not know is that San Diego is home to more than 150 local breweries. A lot of those breweries rank as the best in the world!

San Diego also has a huge arts and culture scene. It’s home to Balboa Park, which is the largest cultural urban park in the U.S. The city is very close to Mexico, so it has a diverse population and many places that showcase Mexican culture.

Next on our list is San Jose. San Jose is nicknamed the capital of Silicon Valley due to its proximity to tech headquarters, including Google and Apple. Even though there is a distinct downtown area, most of San Jose is made up of suburban neighborhoods and tech company campuses. Because of this, the nightlife in San Jose isn’t very prevalent. However, there’s still plenty to do in the area. There’s a huge San Pedro Square Market downtown where you can find local produce and delicious food from local eats. For shopping, there’s the Santana Row in West San Jose. Here you can find upscale shopping and cute boutiques. You can also check out the 120-acre flea market for thrift gems.

Like many southern California cities, the weather here rarely dips below 50 degrees. However, droughts are common in the area, which can lead to water use restrictions. With its location, San Jose has a lot of Latino and Asian influence, which you’ll find throughout the city.

Next up is the beautiful San Francisco. We’re not just saying it’s beautiful, it’s proved beautiful. With beautiful water views, hilly streets, and charming cable cars, it’s no wonder the city was in the top 10 most beautiful cities in the world in 2020. San Francisco is located in northern California, making the climate and weather not as ‘nice’ as the southern cities. Here in San Francisco, you can expect a lot of fog, making it a sort of gray weather. However, when you do find it okay to explore outside, you’ll have plenty of options for things to do. For nature lovers, you can find hiking just about anywhere. Check out the Land’s End Trail and the Marin Headlands trail. There’s also the Golden Gate Park, which is the third most visited park in the U.S. Aside from nature, you can find plenty of art or history buffs as well. You can check out the museums and you can also tour Alcatraz Island.

Halfway down the list is Fresno, CA. Fresno is one of the more affordable big cities in California. What’s unique about Fresno is that it’s at the heart of California, making it close proximity to just about anything. If you want to stay in your city, though, there’s still things to do – like visit Yosemite National Park. There’s a fantastic food scene in Fresno that offers fresh, local products year-round. Plus, for being a city, Fresno is known for being easily drivable and accessible. There is low traffic and it is very easy to get around.

The weather in Fresco sees over 100 degrees sometimes, but it’s a mostly dry heat, making it a little more bearable.

Not surprisingly, on our list is the capital of California – Sacramento! When people think about living in California, Sacramento is usually overlooked by the other major cities. However, there’s a lot to rave about in Sacramento. Known for having a laid-back culture and amazing food and drink, many families and young adults are starting to call this city home. For California, and compared to the other large cities, Sacramento has relatively affordable housing and a very promising job market. The economy in Sacramento is booming and jobs are increasing. Outside the office, there’s a bunch to do, too. Being the capital, there are a lot of museums where you can learn about the history of the area. You can also check out the Sacramento Zoo and hike the many trails around.

Long Beach is for water lovers. Known as a Californian coastal gem, most of the popular attractions are near the waterfront. The city has about 28 miles of coastline with multiple access points. The best beaches to check out are Alamitos Bay Beach and Belmont Shore Beach (which allows dogs)! The city also has green space, you’ll be able to find plenty of parks minutes away.

Oakland is located just east of San Francisco, making it very similar to San Francisco. The city is charming with fantastic food. Although not in the heart of the more well-known San Francisco, Oakland is a much more affordable option. There are also great public transportation options in the city, including the Bay Area Transport (BART), so you won’t have to worry about driving much. The weather, just like SF, is a Mediterranean climate. This means it’s low humidity with dry summers and colder winters.

Bakersfield is located close to L.A., making it a desirable, and more affordable location for those who want to be by the big city without living in it. If you’re not looking to leave your city, though, there’s still a lot for you to do here – including a visit to the Bakersfield Museum of Art. There are also more job opportunities here. The job market in the city has seen a big increase over the last decade, and it has hopes to continue.

A drawback of Bakersfield is its higher than average crime rate. The crime rate here is rated 85% above the national average, so you’ll want to make sure to be careful.

Last on the list in Anaheim. Located just south of L.A, Anaheim gives its residents more of a suburban neighborhood feel than the big cities, but it also gets very, very hot. Anaheim is also home to Disneyland Resort and Theme Park, making it a great place to live with kids. The cost of living here is higher than some other cities, but Anaheim makes up for it with its modern, upscale look and plethora of activities.

How many cities are there in California?

There are 482 cities in the state of California and about 83.4% of the state’s total population live in the cities.

What is the most populous city in California?

Los Angeles is the largest city in California with a population of 3,973,278 people.

How many people live in California?

Which of California’s Biggest Cities is Right for You?

Hopefully, after going through the major cities in California, you’ve started to get an idea of which city is best for you. Once you’ve decided where you want to call home, our team of California movers is here to help you. For reliable and efficient moving, call AMS Relocation at 650-000-0000. We’ll make sure to get you there quickly and easily.